Leonard Cohen: A Life In Art

Almost a year gone, Leonard Cohen has had that most subtle and elusive kind of fame that is rarely found in artists. At times massively famous, at times seeming to have a cult following, in 2008 he proved he was all but gone. There have been several Leonard Cohen biographies written through the decades, with Sylvie Simmons' being perhaps the most insightful, but here I would like to highlight the elements that made Leonard Cohen...well, Leonard Cohen.

He was born on this day in 1934 in Montreal. His maternal grandfather was a rabbi, and his father ran the family business of high end suits, The Freedman Company. Raised in a house of suits, Leonard would later state that he tried the whole jeans thing, but it wasn't for him. Imagining him in a different attire would be quite hard, so here you go:

He led an unusual artist's life, in that he always lived off his art. While attending McGill University he published his first collection of poetry, with others soon to follow. Later he moved to London to pursue a career as a writer, but found the weather depressing (no surprises there). But at least that paved the way for one of his most popular songs decades later, Famous Blue Raincoat. One rainy day, he passed by a London branch of the Bank of Greece, where he was struck by the cashier's tan. So he asked him where he had gotten that tan, and the cashier told him he was Greek.

So in the spur of the moment, Leonard packed what he had and made his way to Athens. Soon after, he visited the island of Hydra, and, enamored with the island's quiet and natural beauty, used his grandmother's inheritance to buy a house there. He would spend the next odd decade living and writing two novels there (The Favorite Game & Beautiful Losers), most of it cohabiting with Marianne Ihlen, the inspiration for the anthem So Long Marianne. You can read Marianne's side of the story in the beautiful biography by Kari Hesthamar

SO LONG, MARIANNE: A LOVE STORY

The residents of Hydra, including the island's small artist colony gathered from all over the world, fell in love with the young Canadian who would often play his guitar at the taverna in the main square. It was in this house that he composed the famous Bird On A Wire, after witnessing a group of drunk men singing in the middle of the night underneath one of the first telephone wires installed in the island (upon which a bird was resting). The house is still there, but the street's name has changed recently.

When he realized that a writer's life couldn't sustain him, he moved to New York to try his luck with songwriting. He never thought he could sing despite having written several songs in Hydra, and at age 31, his burst into the mainstream seamed pretty much a dream. But. A common acquaintance gave him Judy Collins' number. Leonard called her one day, introduced himself, and sang Suzanne to her over the telephone. She loved the song, and recorded it for her next album. Soon, his debut album was out, and the rest, as they say, is history.

Because of the way his lyrics and music style was often perceived (usually by casual listeners, rather than devoted fans), he earned several epithets through the years, like : Prophet Of Despair, Poet Laureate Of Pessimism, Godfather Of Gloom, Spin Doctor For The Apocalypse (!), Prince Of Pain, Master Of Misery, but also the more appropriate Poet Laureate Of Our Dreams, and my personal favorite, High Priest Of Pathos. Asked about it, he said he didn't understand why, claiming he was the most cheerful person he knew.

A poet true to the word, Leonard was disciplined in his music writing, often taking years to complete a song, until he felt he had done his best. Some rumors say that during the recording of the 1984 album Various Positions, he stayed overnight in the studio trying to complete Hallelujah (I think you might have heard of that song); the next morning they found him still there, crouching on the floor of the studio in his underpants, with 80 verses of Hallelujah written down.

His popularity rose during the 70s and 80s, when he produced some of his signature tunes like First We Take Manhattan, Anthem, Dance Me To The End Of Love, and I'm Your Man. In the 90s he grew tired of recording and touring, so he shaved his head and went to live on Mt. Baldy in a Buddhist monastery. He was known as Jikan, The Silent One. After spending a decade there, he descended back to L.A., where he lived quietly and completely removed from the spotlight until a blessing dressed in the robes of catastrophe rippled the quiet waters of his life. Kelley Lynch, Leonard's manager, had drained his bank account and left him with little money to enjoy his golden years. He sued her for fraud, and here's something you would've have heard if you attended the court proceedings:

In reality it was a blessing for his career, his fans, but most importantly for him. The only way to retrieve the losses was to go on tour again, despite being worried that no one would show up to his concerts, certain that the world had long forgotten about him. So Leonard Cohen, in his 70s, set out on a world tour that ended up lasting 5 years (2008-13), filling stadiums all over the world, giving shows which often lasted 3 and 4 hours. He discovered that the fans he had won over in the 70s and 80s not only hadn't forgotten him, but they had raised an entire new generation with his music, and they had kept his songs alive through the years. The response was overwhelming, the atmosphere electric, and he took it with two doses of humility and one dose of humor:

He finished his tour in Auckland, New Zealand, on December 21st, 2013, with a cover of The Drifters' classic Save The Last Dance For Me, and it's magical.

But it wasn't over for him. During the tour he released the album Old Ideas, followed by Popular Problems in 2014, and just a month before his death, at age 82, he released one of the best albums of his career, You Want It Darker. His creative process was never hindered, and according to his son Adam, he continued working on songs till the very end. In a heartwarming anecdote Adam tells, Leonard, despite having to record his last album in an improvised studio at home due to him constantly being restricted to an orthopedic medical chair due to his illness, got up to dance at some point during recording, with the cheerfulness of all his 82 years (and the help of some green herbal remedy for the pain).

Despite proving a particularly prolific artist even in his later years, he would be the first to tell you that there is no way to fully understand the creative process. It was baffling even to him, and seemed to provide little help in ways of advice for young writers and musicians, famously saying:

In an interview he gave for the album's release, he famously said that he was ready to die. This was particularly moving after his personal letter to Marianne, who died just a few months before him, was made public and went viral among his fans, where he wrote her:

After alarming fans with his death announcement, he sought to make it up to them by stating in a press release:

He was dead less than a month later. To anyone who ever fell in love with one of his songs, or one of his lines, it was a piece of news they were not ready for. It was a great loss for his family, it was a great loss for the music world, it was hard for the world of literature to lose The Last Living Poet, but it was remarkably a great loss for humanity. His friends were gone, his hair was gray, he ached in the places he used to play, his suits were baggier, but he was the embodiment of the light from Anthem, for the way he taught love and humility, and for his grace on stage and particularly off stage, and for his bottomless well of kindness toward everyone. He might have been right about his singing talents, but even as his voice grew deeper and harsher through the years, like honey on gravel, his magic poured through, and magnetized people. And his words, even in the early days, would be pregnant with the kind of wisdom that does not presume the right answers, but calmly indicates the right questions. Just the other day, a video of one of his last songs was released, and it contains a lot of nods to his major works. I'll link it below, and see how many hints you can recognize.

Also, a memorial concert was just announced by his son. It will take place in Montreal in November, and includes an interesting lineup of artists paying tribute to the High Priest of Pathos. If you're in Montreal, and even if you aren't, this might be the last chance to say goodbye to Leonard whilst in a sea of his most devoted fans.

Raise a glass of Red Needles for Leonard tonight, friends, and whisper his lines to the person next to you. 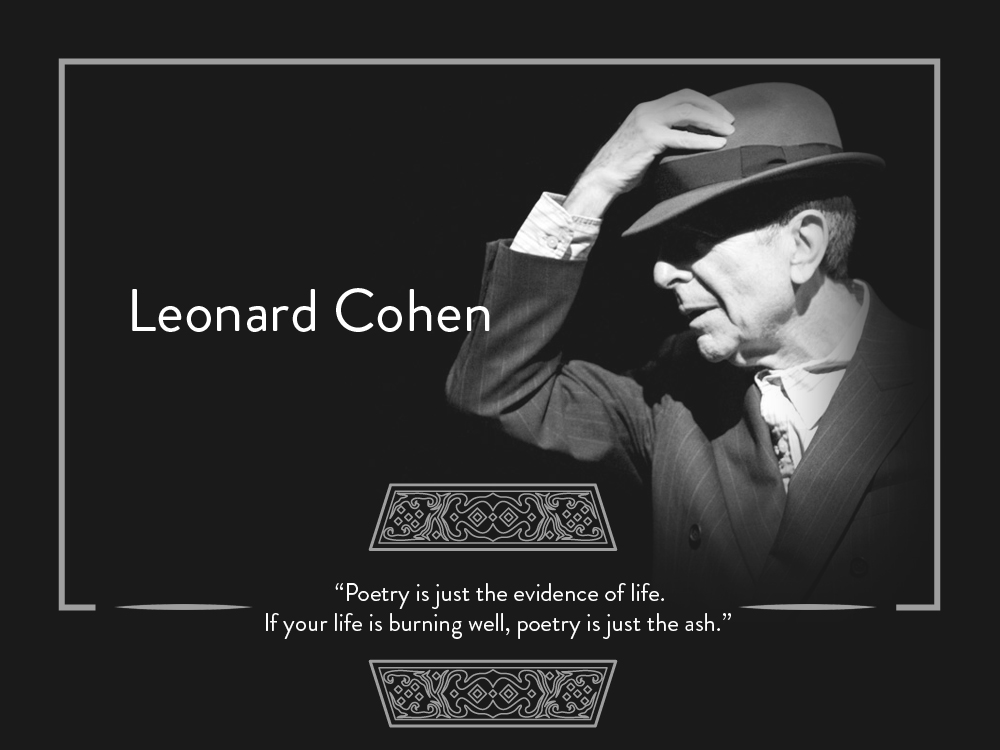