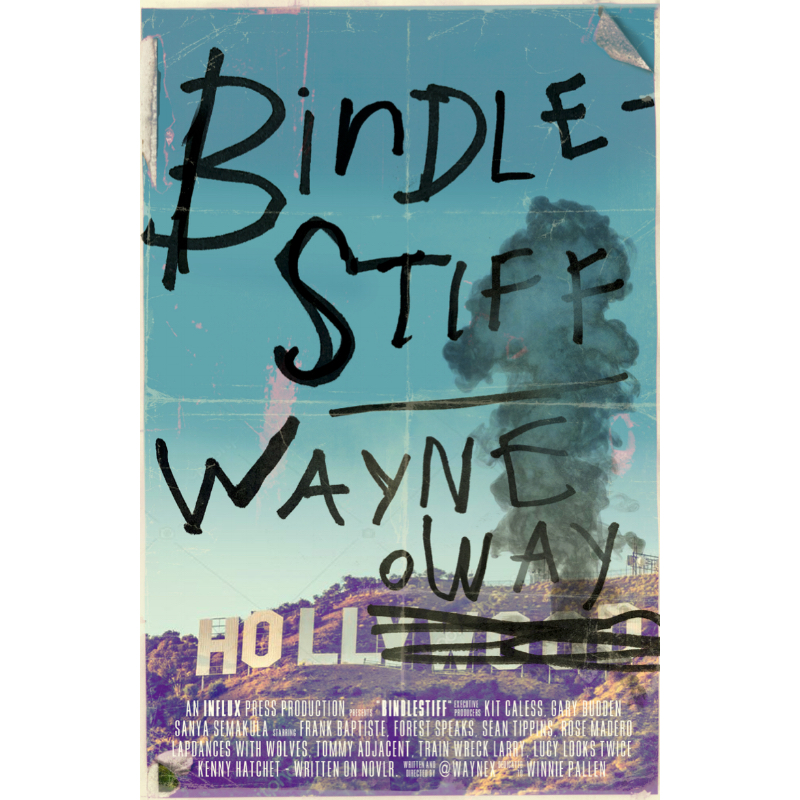 In Bindlestiff, Wayne Holloway catapults us into 2036 California, as ex-marine Frank Baptiste is about to set out on a journey across what used to be the U.S. of A. Along the way, he illustrates what Leonard Cohen might have meant in his short poem from 2006’s Book of Longing. It’s a post-apocalyptic-looking landscape that has seen the disintegration of the federal system and of the internet, along with the socio-economic structures that held the country together. Military compounds, Indian reservations expanding, and a rising population of bindlestiffs – a Depression-era word for hobo. But this post-apocalyptic image is just that – an image conjured by a script written by @waynex in the process of getting the Hollywood treatment.

The frame narrative of the novel is set in 2016 L.A., where @waynex has flown in from London to meet with producers who have optioned his script, also titled Bindlestiff. The script features Frank, taglined as “a black Charlie Chaplin,” an ex-marine driven to a life of drinking in a military compound in L.A. after the events that brought about the collapse of the United States in 2024. After receiving a letter summoning him to Detroit, he sets on a cross-country journey while coming to terms with his past – who he was and who he wants or needs to be. @waynex’s navigation of the pre-production process – including the studio’s casting of a white actor in the lead role, adding two more writers to make the script more audience-friendly and renaming the film Land of Hunger, and the eventual watering-down of his script to the point where it results in a mediocre film that never risks engaging with the sensitive subjects @waynex focused his writing on – turns into an exploration and critique of the film industry. In essence, his critique is not something new, as we are all aware that behind the glamorous and attractive facade of success and fame in the city of stars there’s a cold and ruthless world of concentrated power that moves only in the direction of profit, where artistic integrity and authenticity are only buzzwords that might sell more tickets if marketed right. Of course Holloway depicts all that, but not in the playful way any self-satirising, Hollywood-backed Hollywood movie like Be Cool or Hail, Caesar!, where the audience is tricked with a bait-and-switch, thinking they’re peeking behind the curtain only to be presented with another curtain behind the first one.

The tone of Bindlestiff is refreshing in its calmness, matter-of-factly telling you how things are and how the game is played. @waynex knows from the start that the film he had envisioned, with black action hero Forest Speaks playing Frank in a narrative that deals with the complexities of America’s war activities, racial issues including #BlackLivesMatter and Native Americans, and the rotten core of the whole system: late-stage capitalism exacerbating every form of inequality to the detriment of everyone, will never get made. He knows he will have to give into the requests of producers and studios who will naturally want to play it safe with proven formulas – he knows the choice is between making their version of his script or not making a movie at all. 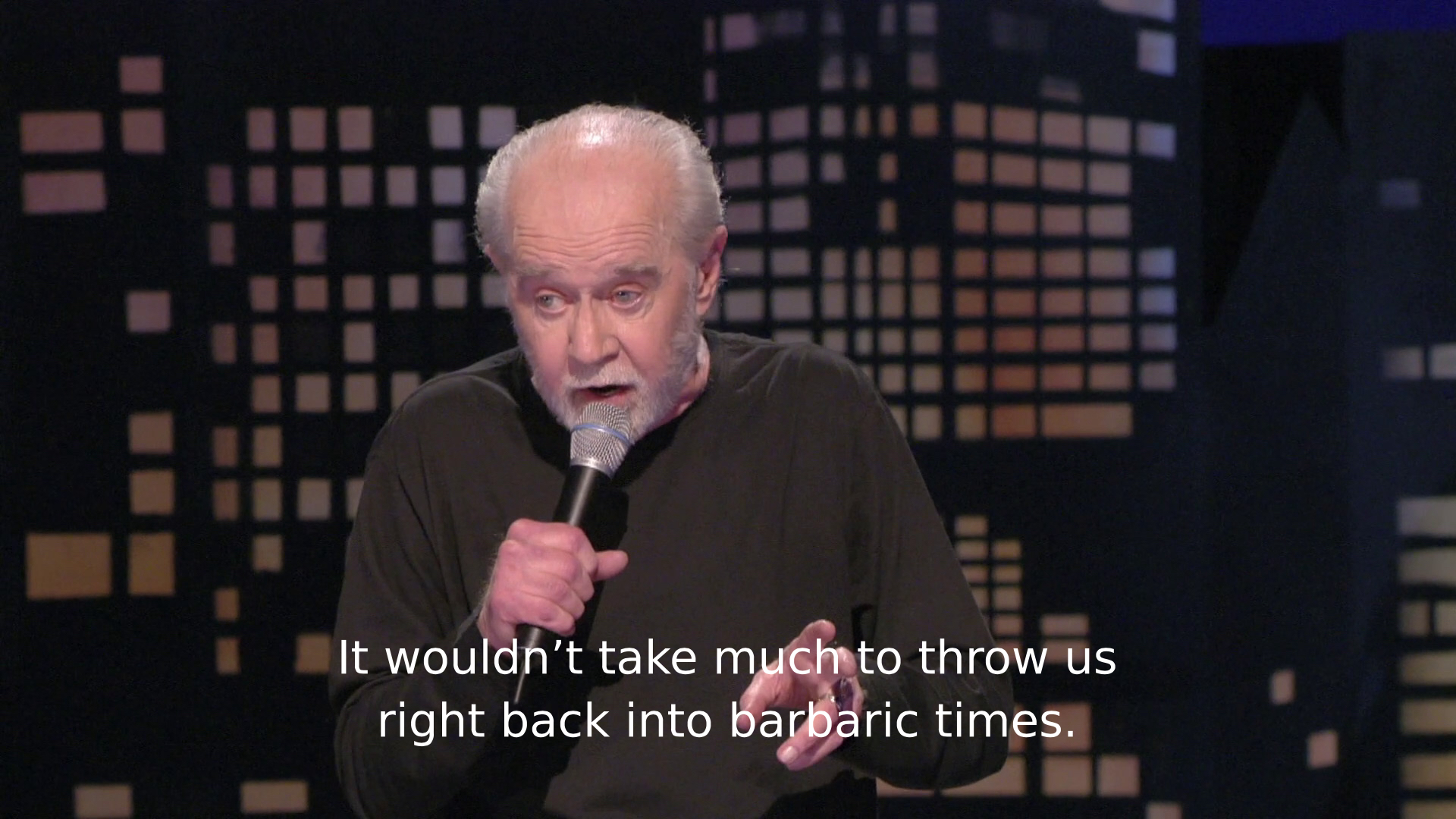 Fortunately, in Bindlestiff the novel we get to see what Bindlestiff the movie was intended to be before it was renamed Land of Hunger. The novel includes chapters in script format, where crucial scenes are presented in their cinematographic form, and prose chapters that both progress the plot and provide background information on this future and commentary by @waynex. Some chapters don’t feature Frank at all, and instead offer a glimpse into the various aspects that define this 2036 America: the economic collapse’s effects on goods, exchange, jobs etc.; the lack of centralised authority allowing Native American tribes to reclaim territory in the Midwest while also dealing with the results of over three centuries of United States in the Native American social DNA – tribal identity, alcoholism, and of course, casinos; an entire social class of homeless people, traveling form ex-state to ex-state depending on where there might be a paying job, many of them boarding freight trains in the night, when killer guard drones aren’t looking, and even vigilante forces like the F.T.R.A. (Freight Train Riders of America) and the mysterious Hobo Killer.

Frank has encounters with a number of characters who are trying to survive in what came after America, and every encounter and conversation is both about this aftermath, on the surface level, and about the U.S. we know today, in the subtext. If the @waynex frame narrative is focused on the rotten core of Hollywood, his script is about everything else rotten in America today: wars in the Middle East and the veterans that come back, the opioid and meth crises, xenophobia and racism, obsessive pop and internet culture, and everything in between. And because it all went up in proverbial flames in 2024, the characters can afford to have the same honesty as the frame narrative. They don’t lament the loss of America, they’re too cynical for that. But even their cynicism is grown-up and resolved, or at least that’s how it reads to 2019 readers. It’s the equivalent of watching an old standup routine about the Bush administration in the third year of Trump in office. Yeah, eight years of Bush were horrible, but look where we are now.

Holloway’s Bindlestiff is the perfect blend if entertainment and thoughtful critique of our present moment and zeitgeist. It’s post-apocalyptic, but for a reason. It’s blunt and honest about everything it observes, and though pessimistic in its disinterest in finding a solution for the problems it raises, its tone is refreshingly sincere in world where every issue is tackled with a call to action that goes nowhere or, failing that, an ironic distance. No bullshit, no self-indulgence, no pretence. 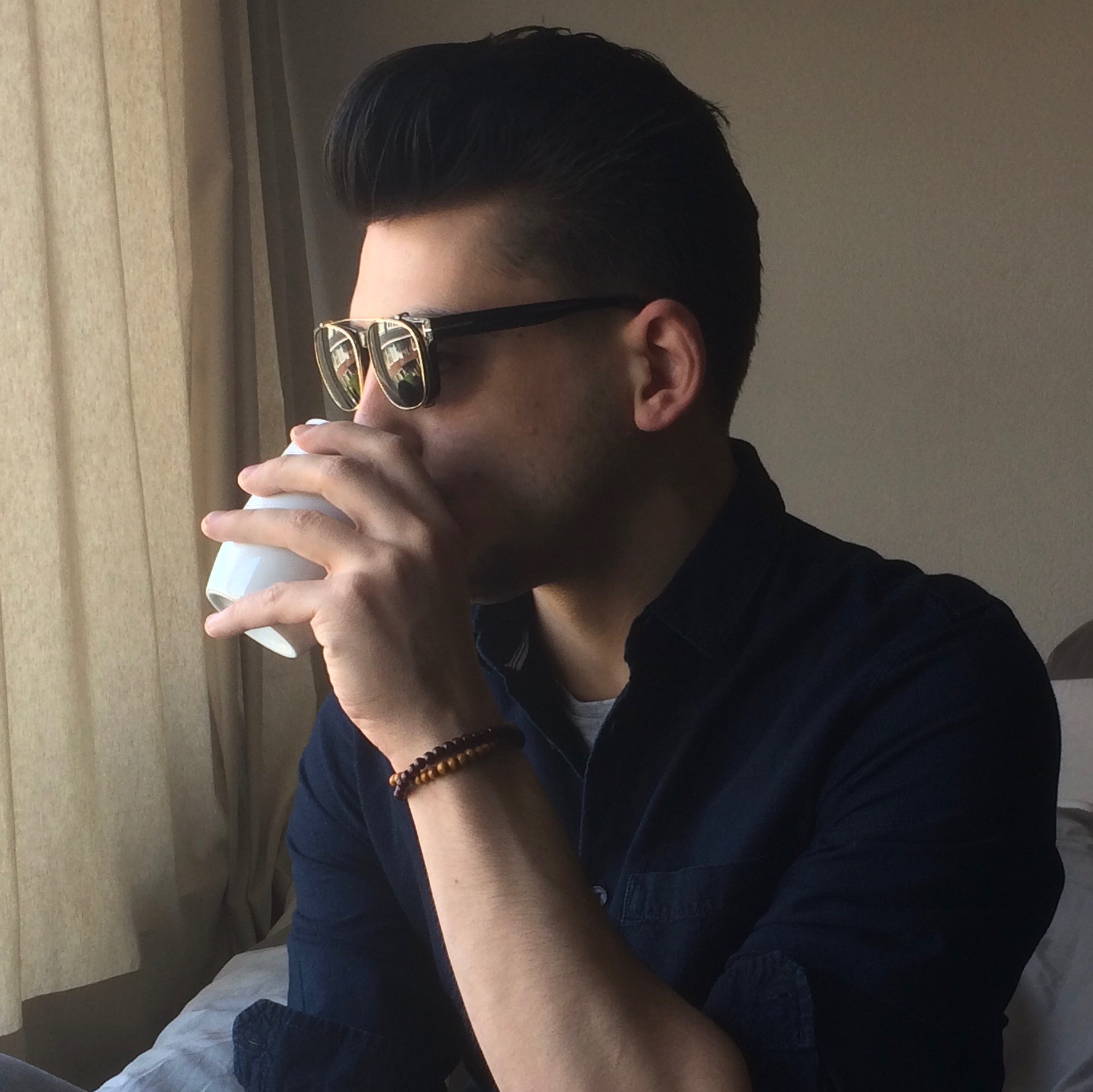